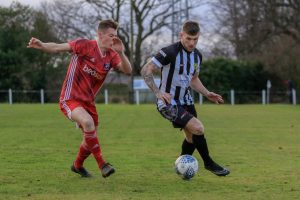 Whickham started the new year with a 4-3 defeat at home to Newton Aycliffe.

Matthew Pennal scored two goals in the space of three minutes, during the midway stages of the first-half, to put the visitors ahead.

The Lang Jacks fought back and were level at the break after goals from Dale Burrell and Ben Harmison.

Pennal scored his third of the game seven minutes into the second-half before Lewis Walton doubled Aycliffe’s advantage on 76 minutes.

Tom Scothern was fouled in the penalty area and Harmison fired home the spot-kick on 87 minutes, but it was too little too late for the hosts.

After ending 2019 with a defeat away to Ashington, Matty Pattison would’ve been hoping for a reaction and his side started on the front foot.

Burrell drew a low save from Adam Pickford before Harmison lobbed the ball up and over the ‘keeper, but inches over the bar.

The visitors started to get a foothold in the game around the 20 minute mark. Their first sight of goal came through Kevin Carr, who fired just wide.

Adam Bartlett was on hand to race off his line and deny Pennal, but the striker wasn’t to be denied just a minute later.

Ethan Wood drove into the box, on the left side, and fired the ball across goal. Pennal was on hand to turn the ball home from close range.

Three minutes later, the visitors doubled their lead. The home side switched off after appealing for a handball and Aycliffe capitalised.

Matthew Lowrie played the ball over the back line, which allowed Pennal to race through and fire home, off the inside of the post.

Whickham pulled a goal back on 33 minutes. Burrell weaved through a few challenges before tucking the ball home. The linesman initially ruled the goal out for offside, somehow, but the referee overturned and awarded the goal.

Liam McNamara was put in the sin-bin in the aftermath and the home side made the most of the man advantage, equalising five minutes before half-time.

Matty Pattison’s cross from the right was struck goalwards by Chad Collins, forcing a great save from Pickford. Harmison managed to turn home the rebound to draw the Lang Jacks level before the break.

Aycliffe had a big opportunity to go into half-time ahead, however, Carr struck across goal and wide of the target in additional time.

Just two minutes after Carr missed another good opening, in the second-half, the visitors took the lead again.

After dealing with a Whickham corner, Aycliffe broke out from the back. A quick counter attack punished the home side with Pennal wrapping up his hat-trick with a neat finish.

The striker was involved in the heart of the action again on 55 minutes. Pennal had an effort saved by Bartlett before hitting the post four minutes later.

Whickham continued in search of a way back into the game, but, on 76 minutes, the visitors opened up a two-goal advantage again.

Walton kept his composure in front of goal to make it 4-2. The hosts did have a chance to pull a goal back when Scothern was brought down in the area by McNamara on 86 minutes.

Harmison rifled the penalty into the roof of the net, his second goal of the game, but the home side were edged out  by Aycliffe in the end.