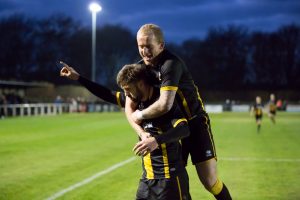 Whickham are pleased to announce the signing of highly-rated midfielder Mark Doninger.

Doninger, 30, was a product of the Newcastle United Academy and has played in Ireland, Australia and Iceland as well as Norway.

He was part of the Shildon side, who picked up the league and cup double in the 2015-16 season, and also previously had a spell at Bedlington Terriers.

Manager Matty Pattison played with Doninger at Newcastle when they were both younger and believes the midfielder is a great signing for the club.

“I know Mark well, I played with him when I was younger,” Pattison said. “I know the quality that he has got, so he’s a player, who you can bring in and you know he’s going to make a difference.

“You know he can get a goal. He’s always a threat and is very good on the ball. He’s someone that we need, something a bit different.

“We need goals, we need people, who can take risks in games. I’m more than happy to have brought him in to the club.”

Doninger has experience in abundance and will bring quality to the Whickham side, who currently sit second-bottom of the Northern League Division One table.

The midfielder, who made appearances for Whickham last season, has gone on to have spells with Morpeth Town, Newcastle Benfield and West Auckland Town in the Northern League and Pattison believes he will bring a lot to the team.

He continued: “He’s got quality on the ball. He’s got a great right foot on him, can take shots from distance, a really great strike on him.

“He’s dangerous and if you get him in the right frame of mind, and he’s on his game, then he’s a very good player. He’s always had that threat and need to utilise that to get the best out of him. That’s what I’ll be looking to do.”