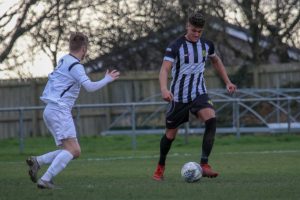 Whickham battled hard as they picked up an important point after holding West Auckland Town to a goalless draw at the First Mortgage Glebe.

Adam Mitchell struck the post on seven minutes and the visitors hit the crossbar through Liam Hegarty just a minute later.

The hosts worked hard throughout the first 45 minutes, kicking into blustery conditions, and managed to see it through to half-time.

Matty Pattison’s side opened up a bit more in the second-half, but neither side managed to find a breakthrough on a frustrating afternoon.

Defender George Lindo was handed a debut by Pattison, but it was the away side that started on the front foot.

Craig Spooner played the ball up to Mitchell, whose shot deflected, hit the post and evaded the other post by inches before going behind.

Under a minute later, the woodwork came to Whickham’s rescue as Hegarty’s cross was caught by the wind and clipped the bar.

Amar Purewal struck over the crossbar on 27 minutes, while the hosts had their first sight of goal on 35 minutes.

Lee McAndrew was played through down the right side and flashed his cross across the face of goal, but nobody managed to get on the end of it.

Four minutes before half-time, the visitors had their best opening of the half, but an unmarked Spooner blazed his effort high over the bar.

Jack Wilson was on hand to deny Mitchell at his near post and the two sides couldn’t be separated at the break.

The visitors made an attacking change at half-time and could’ve gone ahead on two occasions before the hour mark.

Kieran Galbraith reacted well to block Purewal’s shot in the area before substitute David Dowson, who raced through on goal, was denied by the ‘keeper.

Lee McAndrew’s long-rang effort was gathered easily by Tom Flynn, while Purewal headed Mitchell’s corner goalwards, which was pushed away by Wilson.

Alex Francis almost made an immediate impact when his effort, which took a slight deflection off Galbraith, went inches wide of the post.

In the aftermath, Galbraith was shown a yellow card and was put into the sin bin for 10 minutes. The hosts saw out that period with 10-men well and the game entered the closing stages still level.

After Jonny Burn headed wide on 76 minutes, neither side managed to create anything else and both sides settled for a point on a difficult afternoon.