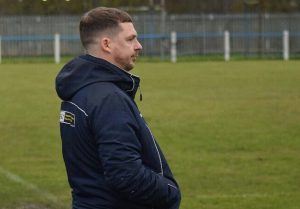 Whickham Football Club are delighted to announce the appointment of Mark Convery as the club’s new manager.

The Lang Jacks have acted swiftly to appoint Matty Pattison’s replacement and Convery comes in having previous experience at playing and managing in the Northern League.

Convery, who played professionally for the likes of Darlington, York City and Cambridge United, comes in with 14 league games remaining and knows how big the task is.

“You’ve got to look at the fixtures because you’ve got to be realistic,” he said. “We’re two-thirds of the season through and for whatever reason it hasn’t clicked and results haven’t gone well.

“I’m not coming in deluded thinking we will play the likes of Hebburn and turn them over, it’s going to be difficult, but there’s certainly fixtures in there against teams that also haven’t had great seasons either.

“It’s going to be a case of really focussing on them ones. If we can pick up points against the teams around us, then we will be trying to do just that and it’ll be another week that they’re not getting anything either.

“It’s really tight down the bottom. One or two wins and it’s a complete different picture. I’m under no illusion that it’ll be easy getting two or three wins, but we will have to fight and scrap for everything that we get.

“I’ll be relaying that to the players, that we’re coming in with a fresh set of eyes. The first thing I need is the work-rate from the lads and then everything else we can build on.”

He continued: “I know how I want to play and the way the lads set up on Saturday wasn’t miles from that. I’ve got a couple of instructions to get across and really simplify things.

“Everybody in the team is going to have a role to play and that’s their task. I’m hoping I can put my stamp on things pretty quickly. If it doesn’t work, I’m not a one formation kind of manager, I’m flexible and we can change.

“We need to pick results up. I’m not buying time, nothing like that, because I’m under no illusion that we’re going into Saturday’s game with the whole intentions of, at the very minimum, getting a draw.”

Convery played in the Northern League for Bedlington Terriers before moving to Newcastle Benfield, where he would then make the step into management.

His role at Benfield was his first in management, where he was in charge for two-and-a-half years, and the newly-appointed manager is hoping to use his past experiences as he looks to steer the team away from danger.

Convery added: “I’ve played and managed against Whickham before, so I knew as much as I could about the club without actually being behind the scenes.

“I kept note of the promotion from the Second Division and then staying up last season was a big achievement. I’ve been out of the game for a season or so and I’ve been looking to get back into it.

“Any opportunity that’s come up, I’ve sat and thought about it long and hard. Coming in here at Whickham, the team are bottom of the league, so it’s going to be a big challenge.

“I’m not underestimating it by any stretch of the imagination. I’m coming in with my eyes fully open that it won’t be an easy challenge.

“When I heard the possibility of the job coming up, especially when I know a couple of people behind the scenes, it was something where I thought I could come in and make a difference.”

Convery has brought in former Gateshead and York City midfielder Steve Bowey as his assistant manager. Bowey has a wealth of knowledge and experience in the game, especially at this level.

The pair were teammates at York and know each other very well and Convery believes Bowey will bring a lot to the table.

“I’ve known him for a number of years. We’ve built up a relationship and one that’s never gone away. I’ve managed him and he’s managed me at previous clubs.

“He doesn’t let things get him down, he’s a bubbly character and I think he’ll be that good link between me and the players.”

Convery will be in the dugout for the first time this weekend when the Lang Jacks travel to take on Seaham Red Star at the Ferguson Motor Repairs Stadium.