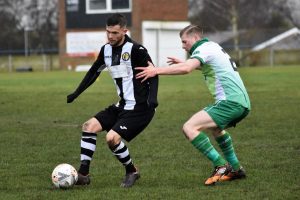 Whickham are delighted to announce that striker Damien Stevens has signed back with the club after a short spell with Birtley Town.

Stevens, who has also featured for Ashington this season, was with the Lang Jacks for just under a year and scored eight goals in 19 games.

The striker has a prolific record in front of goal and has previous experience playing at this level for the likes of South Shields, Marske United, Guisborough Town and Ryhope CW. Stevens believes he has a “point to prove” with the Lang Jacks.

“It’s great to be back at Whickham,” said Stevens. “I felt like I never got started last time at the club. Now I’m settled on a personal level.

“I just need to now get back to my old hard-working self and get my passion back. I know Willa, Con and Bowsa and I’ve a lot of respect for them all.

“They all have great knowledge of the game and they have given me the opportunity to come back to Whickham and set the marker straight. I feel like I’ve got a bit of a point to prove.

“They’re a great set of lads at Whickham and I know a lot of them from this season having been with them in pre-season. Overall, I’m really happy to be back and hopefully we kick on. Saturday is a hard game away at Seaham.”

Stevens could be set to make his first appearance for the club since the 2018-19 season away at Seaham Red Star this weekend. He scored against the Star back in March 2019 during the 1-1 draw at the Glebe.

The striker becomes new manager Mark Convery’s first signing since taking over the helm at the club. The Lang Jacks’ boss spoke about Stevens and was pleased to bring him back to the club.

Convery said: “He’s got a lot of potential and he’s shown that during different spells with different clubs. He had a good move to Marske and he’s always had a good affiliation with Ashington.

“He’s been around the Northern League for a few years. He gets goals and, looking at the current squad, I just feel he can add something up front, a bit more of a presence, just to take some of the stress off some of the younger lads.

“When I heard that he was potentially available, he was somebody that I was really interested in bringing in.”