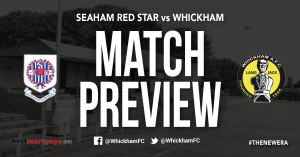 The Lang Jacks, who picked up a point and a clean-sheet in their last match, have claimed just four points in the league since the end of August.

Seven points separate the two sides in the league, with Seaham sitting above Whickham in the Division One table, but the Lang Jacks have a game in hand.

The two sides have already faced each other twice this season, with Seaham winning 3-2 in a closely-fought game in the league and then 4-2 in the Durham Challenge Cup.

Dan Wilson’s goal was cancelled out by Jamie Poole’s strike, but a 90th-minute winner from Richard Coulson saw the Star take home the points.

In terms of their form, Seaham have won two of their last 10 games in all competitions. They have won two, drawn three and lost eight games at home in the league – scoring 18 goals and conceding 30.

The Star have scored seven goals against Whickham in the two meetings so far this season, with striker Wilson scoring three across those games.