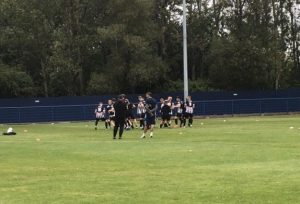 Whickham’s 2-0 defeat to Cullercoats last time out seemed to inspire them to a solid victory over local rivals Dunston UTS in a friendly played behind closed doors.

The game had a fast-paced start to the match with the home side holding a very high line and catching Whickham offside several times.

However, the visitors took the lead after 20 minutes when Jack Robson broke the offside trap before firing a shot straight at the goalkeeper only for the ball to roll underneath him.

The Lang Jacks then doubled their lead five minutes from the half-time whistle when Jack Errington’s long punt bounced over the high line of Dunston with Scott McCarthy pouncing on the misjudgement of the defenders and poking the ball past the onrushing goalkeeper on the edge of the box into the goal.

Three minutes later the visitors were well and truly cruising when the away side passed their way through the hosts pressing forward line before another long ball fell behind UTS’s defence with Jack Robson racing to get to the ball on the right-hand side of the box before unselfishly providing a tap in for Scott McCarthy’s second.

Dunston upped the pressure in the second half but were unable to pull any goals back as Whickham held onto an impressive win and their first clean sheet of their current pre-season run out.

With the absence of the head coach Mark Convery, it was Craig Heward and Steve Bowey in charge.

“With the forward three of Scott Robson, Jack Robson and Scott McCarthy with their strength and pace, I thought they were the difference but it was a great all-round performance the first-half especially”.

He continued to highlight how much of a ‘great team performance’ it was. However, due ue to the many substitutes in the second half “it was very stop and start and then all of the momentum went out of the game”

Craig described the improvement he saw in this game in comparison to the game against Cullercoats FC stating, “We had a lot of trialists on Wednesday which wasn’t up to scratch and we set a high standard here and it wasn’t acceptable Wednesday but today we had a few words in the dressing room before the game and said what we expect and to be fair I thought the performance level was excellent”.