Skip to content
A first half finish by Adam Forster spurred North Shields on as Whickham fell to 3-1 defeat at the Daren Persson Stadium. The hosts took the lead just after the half-hour mark – Forster linking up with Dan Wilson before the former converted his chance which was scored 10 minutes after Wilson’s penalty miss. Ryan Carr then headed home from close range after the initial save from Regan Ward, eight minutes after the second half restart. The Glebemen’s hopes of a comeback were all but finished when Wilson converted a penalty on the hour mark. Whickham grabbed a late consolation goal through an exquisite free-kick from Oli Leedham but the Lang Jacks left it too late for any chance of a comeback. There was no Mark Convery at the sidelines but his team came into the match having made two changes to the starting lineup from their draw with Newton Aycliffe with Lewis McNall and Jack Errington returning in replacement for Steve Bowey and an injured Jack Robson. The home side nearly opened the scoring early on, when Callum Smith got in behind Tomas Howard down the right-wing, but was unable to find Dan Wilson inside the area for a tap-in. Shields continued to dominate the early stages as Cam Cunningham bent an effort just wide of Ward’s goal with 11 minutes played. Five minutes later Smith came the closest for the hosts, forcing Ward into a save after creating a one-on-one with the goalkeeper. The away side managed their first shot on target straight after Smith’s chance when McNall struck a low effort from a tight angle straight at Greg Purvis. Experienced midfielder Conor Newton was then substituted off for Liam Doyle after a niggling knee injury flared up one too many times. 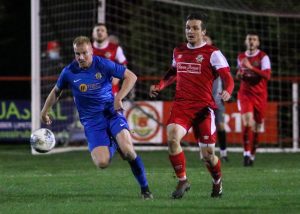 (Credit to Will Matthews for the photo) The Lang Jacks then gave the Reds a great opportunity to take the lead after Ward tripped David Robinson in the area. Wilson stepped up to take the penalty but could not break the deadlock, smashing his penalty off the crossbar before going behind for a goal kick. Shields were creeping ever-closer to the Whickham goal as Jack Errington made a last second block to deny Robinson’s driven shot with 24 minutes gone. However, Whickham’s resilient defending was eventually broken when Forster played a one-two with Wilson allowing Forster to smash the ball into the roof of the net in the 31st minute. Immediately after Forster’s goal, Dale Burrell also limped off the pitch adding to Whickham’s injury woes, being replaced by Lee McAndrew. 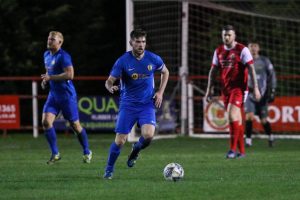 (Credit to Will Matthews) Recent substitute Lee McAndrew then managed to find Scott Robson with a looping cross but Robson misjudged his attempted volley allowing the defence to clear the ball. Continuous heavy pressure from Shields continued into the second-half forcing Lee McAndrew to block another effort from close-range. This pressure caused the Glebemen to crumble once again when Ward denied a powerful header from Wilson before Carr was able to double the lead. The losing side responded well to the second goal, nearly getting one back after a short free-kick was fired at goal from Declan Bisset causing a goalmouth scramble but no one was able to capitalise. Shortly afterwards a mistake by Ward gave Smith an open goal to aim for before Errington slid in to make a last ditch tackle but apparently the defender had taken the man and so the referee pointed to the spot. Wilson placed the ball into the net from 12-yards out giving Shields a comfortable 3-0 lead. The home side had the majority of the possession in the later stages but it was Oli Leedham who claimed the last goal of the match when he curled a free-kick into the ‘keepers left hand corner of the net to pull a goal back for the away side. The Lang Jacks next face Stockton Town at home on Saturday, October 31st. Starting XI: R. Ward, T. Howard, C. Exley, D. Burrell (L. McAndrew, 32′), J. Errington, C. Newton (L. Doyle, 17′), D. Bisset, K. Downey, S. Robson, L. McNall (O. Leedham, 69′), Z. Atkinson. Substitutes not used: R. Peareth, S. Bowey. Three things we learned: A frustrated Regan Ward was voted Whickham’s man of the match and spoke to Ben Robinson after the defeat: 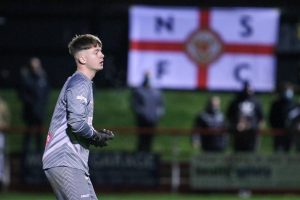