In response to recent news, Whickham FC will be providing FREE packed lunches during half-term to those families who are struggling without the school meals.
We’ll be at the Glebe Ground, in the Corner Flag Cafe, from 12pm-2pm starting Monday 26th October.
There will be a choice of ham or cheese sandwich, a bag of crisps a piece of fruit, a chocolate bar and a drink.
More importantly, there will be no judgement, no questions, no need for embarrassment. We are here to stand beside our community.
Please share this to the rest of the community. If you want to drop us a confidential email, or for more information, contact whickhamfc1944@gmail.com
NO child should go hungry in this day and age.
With special thanks to our sponsors First Mortgage NE and Furniture Clinic for their support.

After an abrupt end to the 2019/20 Northern League Division One season due to the calamitous coronavirus, Whickham were desperate to get back into action on the pitch and start playing football again and after a long three months the squad were given the green light to start playing again.

“I’m really pleased with pre-season and all of the lads attitudes during these games, we are ready as you can be for competitive games, we are just looking at the opening games and hoping to get off to a good start and build from there”.

This meant a beginning of pre-season friendlies and the first opponents Whickham faced were Prudhoe Y.C.F.C away.

The game finished 4-1 to the Lang Jacks with Kieron Moat opening the score for the away side after five minutes before Scott Robson doubled the lead ten minutes after half-time.

Prudhoe pulled a goal back with twenty minutes remaining but another goal for Scott Robson and a goal for a substitute trialist wrapped up the victory for the visitors who ran out 4-1 winners.

Looking to keep up their momentum from the first pre-season fixture against Prudhoe Y.C.F.C, Whickham snatched a draw to remain without a loss in pre-season.

The visitors went into half-time 2-0 up and looking good value for a win before a second half comeback and goals through Jack Robson (2) and Charlie Exley turned the match around before SSFC equalised late on.

Whickham just couldn’t get started in this game and even with a lot of possession the home side were set up as a team that were hard to beat.

After a sluggish start by Mark Convery’s men, Cullercoats took advantage of the lethargic attitude when the ball flew into Whickham’s net from 25-yards-out before a second goal five minutes later proved more than enough to win the game.

Losing 2-0 in the last match away to Cullercoats must have lit a fire inside the players as they went on to thump Northern Premier League N/West local rivals Dunston UTS 3-0.

With Dunston holding a very high line early on in the match and pressing very high up the field, it meant that the black and white’s rapid front three could capitalise if they could get in behind which they did after 20 minutes when Jack Robson broke free down the right-hand side of the area before his shot slipped under the goalkeeper.

A back and forth 20 minutes made it an enticing watch and even more exciting for those on the Whickham bench when Scott McCarthy beat the press and poked his effort past the oncoming goalkeeper to double the lead.

Three minutes later McCarthy grabbed his brace tapping home into an empty net after Jack Robson unselfishly laid the ball across the area to McCarthy.

Whickham were held to a second pre-season draw against Brandon United.

No real chances either way as both teams had a good runout and a chance to increase match fitness.

The last pre-season friendly before competitive football starts again for the Lang Jacks ended in a seven goal thriller but this time with the return of fans.

The home side had a dream start scoring in under a minute when the high pressure against a young Gateshead team paid off through Jack Robson.

Liam Doyle then doubled the lead after 16 minutes, dinking a first-time finish over the rushing goalkeeper.

With six minutes before the half-time break there were suddenly three goals in that short period with the visitors scoring a penalty on the 39th minute before Scott Robson scored the home sides third and one more reply by Gateshead left the scores at 3-2 to the home side at half-time.

Ross Peareth then helped Whickham regain their two-goal advantage with a towering header from a corner before multiple chances both ways and a last second header scored by Gateshead ended the heart-racing game 4-3.

Ahead of the return of football to the First Mortgage Glebe, Whickham FC have produced an updated risk assessment per government and FA guidelines. Any queries, please contact Secretary@whickhamfc.com

Tickets are now on sale for our FA Cup game against West Allotment Celtic at the First Mortgage Glebe, on Tuesday, September 1 2020.

Allotment make the trip to the Glebe for an Extra Preliminary Round game (7.45pm kick-off) which acts as the curtain-raiser to the new season.

In light of the latest government and FA guidelines on allowing spectators to return to the First Mortgage Glebe, a capacity of 300 spectators will be able to attend, so we intend to make the game all-ticket.

Tickets will be on sale on Wednesday evening at the Glebe from 5.30pm onwards and are priced £7 for adults and £3 for concessions (U16s and senior citizens). Other dates will be available to buy and collect tickets but to avoid issues on the day of the game, tickets must be pre-booked. They will be made available on a first come, first served basis.

Conditions of booking are:

Spectators wishing to pre-book tickets should email whickhamfc1944@gmail.com. Confirmation of your tickets and details of payment will then be sent to you.

Whickham FC retain the right to refuse admission, or ask to leave, anyone not complying with the above conditions.

Ahead of the return of football to the First Mortgage Glebe, Whickham FC have produced a risk assessment per government and FA guidelines. Any queries, please contact Secretary@whickhamfc.com

Whickham FC have decided to make our pre-season friendly against a Gateshead XI on Wednesday, August 26 (6.45pm kick-off) an all-ticket game.

In light of the latest government and FA guidelines on allowing spectators to return to the First Mortgage Glebe, a capacity of 150 spectators will be able to attend.

To avoid issues on the day of the game, tickets must be pre-booked. They will be made available on a first come, first served basis.

Conditions of booking are:

Spectators wishing to pre-book tickets should email whickhamfc1944@gmail.com. Confirmation of your tickets and details of payment will then be sent to you.

Whickham FC retain the right to refuse admission, or ask to leave, anyone not complying with the above conditions.

Whickham FC can announce the list of players re-signed for the 2020-21 Northern League Division One season. END_OF_DOCUMENT_TOKEN_TO_BE_REPLACED 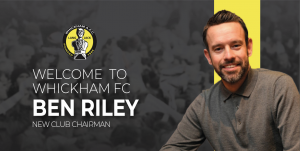 Whickham Football Club are delighted to announce that Ben Riley has taken up the position of club chairman.
Ben, 40, is a successful local businessman who attended Whickham Comprehensive School, has lived in and around the town all his life, and is well known in the community.
Ben co-founded First Mortgage in 2007 and has seen the award-winning business go from strength to strength over the last 13 years, with branches now in Gateshead, Newcastle, Sunderland, Durham and York.
He played local league football and cricket for Whickham CC, and has been a supporter and sponsor for both the sporting outfits in the town, and he and business partner Philip McGuire took on the renaming rights at the Glebe last summer.
He is now looking forward to leading the football club through the next chapter of its story at the First Mortgage Glebe alongside management duo Mark Convery and Steve Bowey.
Ben said: “I am honoured to accept the committee’s offer to become chairman of Whickham FC. This is a hugely exciting opportunity for me and I would like to thank the committee for placing their trust in me to take the club forward over the coming years.
“The committee have really impressed me with their passion for the club and have shown a real patience and desire to get me to the club.
“I have sought advice from ex-Whickham players, managers and friends and they all couldn’t speak more highly of the club and the committee.
“The club has done well in recent years, most notably securing promotion to Division One, but we need to make sure all that hard work that has gone before is not wasted.
“Mark and Steve have great experience at this level and they have my full support.
“I look forward to seeing you all at the First Mortgage Glebe.”

Whickham Football Club can confirm the departure of defender Jonny Burn, who has signed for BetVictor Northern Premier Division side, Whitby Town.

Burn, who played for Darlington during the 2018-19 season, signed for the Lang Jacks in October 2019 and went on to make 12 appearances last season.

Everyone at Whickham FC would like to wish Jonny all the best with his new club.

Whickham Football Club can officially announce the details for the competition, which will see the front of shirt sponsorship replaced by a message of support, dedicated to our NHS and key workers. END_OF_DOCUMENT_TOKEN_TO_BE_REPLACED