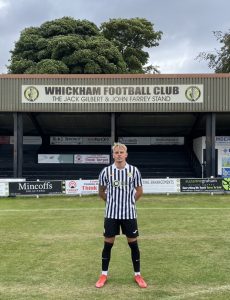 Scott signed for the club in August 2019 after a very successful two years with the Park View Academy of Sport, where he won the National Youth League and National Youth Cup – with the Carlisle PV team.

The young forward is a hard-working player, who has pace to burn and will cause opposition defenders real problems. Whickham fought off competition from some of the top teams in the region for his signature.

He also has previous Northern League experience with Chester-le-Street Town, where he spent the 2018-19 season.

Scott has taken on the club’s number nine role in the last six months hitting 12 goals in his last 14 matches. Scott has a big season ahead of him and knows what it will take to make it to the very top with his Dad, Uncle Bryan and Uncle Gary having played at the highest level.